Today’s blog continues our look at countering the many lies being promulgated by the Trump administration in its misguided and increasingly dangerous campaign to demonize China:

To this end, we feature an important commentary by Jeffrey D. Sachs entitled American’s Unholy Crusade Against China, which first appeared on the (paywalled) Project Syndicate website on 5 August, but which can also be freely accessed here.

Jeffrey Sachs reminds us that the only country with a defence strategy calling for global dominance is the United States of America. In sharp contrast, in a section of their defence policy entitled “Never Seeking Hegemony, Expansion or Spheres of Influence”, China states:

Since its founding 70 years ago, the People’s Republic of China (PRC) has never started any war or conflict…. History proves and will continue to prove that China will never follow the beaten track of big powers in seeking hegemony.

For those who say that talk is cheap, Sachs next compares the military deployments of the two countries:

The US…has around 800 overseas military bases, while China has just one (a small naval base in Djibouti).

Ponder that statistic for a moment. Consider further that, in the Asia Pacific, American bases virtually encircle China. 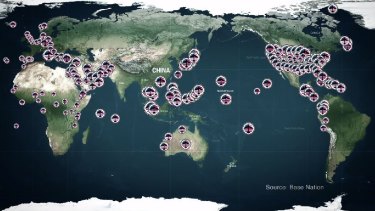 For a more exhaustive review by the Rand corporation of American dominance, in scenarios close to mainland China (the Spratley Islands and the Taiwan Strait), see: An Interactive Look at the U.S.-China Military Scorecard (rand.org, 2018).

The US has launched many overseas wars in the past 40 years; China has launched none (though it has been criticized for border skirmishes, most recently with India, that stop short of war).

Looking at the overall economic standing of both countries, once again we find that America is far in the lead:

… at an estimated $10,098 in 2019, China’s GDP per capita was less than one-sixth that of the US ($65,112) — hardly the basis for global supremacy. China still has a lot of catching up to do to achieve even its basic economic development goals.

For the full article, which reviews the historical roots of the American belief in their “manifest destiny” and “exceptionalism”, and Pompeo’s own disturbing evangelical fervour, see: America’s Unholy Crusade Against China (Jeffrey D. Sachs, thejakartapost.com, 7 August 2020).

For a fascinating scholarly review that examines the potential for constructive management of the relationship between these two superpowers, see: Is A New Cold Ear Inevitable? Chinese Perspectives on US–China Strategic Competition (Minghao Zhao, The Chinese Journal of International Politics, Volume 12, Issue 3, Autumn 2019, Pages 371–394).

As US–China tensions soar, the rest of the world worries about being caught in the crossfire. As such, there is now an urgent need for China and the United States to remain strategically restrained and to demonstrate greater resourcefulness.

It also becomes more urgent for Chinese scholars and policy elites, together with their American and other foreign counterparts, to make more efforts towards exploring ways of redefining US–China competitive co-existence, avoiding destructive competition, and reassuring the rest of the world.

We need to avoid Cold War between China and the US [which would be] an enormous risk for humankind.

The United States should pragmatically … engage China where possible, while cultivating a coalition based on shared interests and values to hedge against Beijing’s unconstructive behavior.

Here in Canada we face a daily barrage of material in the media demonizing China at every turn. Sources include the right-wing MacDonald Laurier Institute, whose series of one-sided essays is predictably entitled “Dragon at the Door”; and CBC’s Vassy Kapelos’ incessant interviewing on Power and Politics of former diplomat David Mulroney — an articulate purveyor of the Harper/Scheer/O’Toole school of anti-China sentiment. RI President Peggy Mason comments:

Of course David Mulroney and others, like  former National Security Advisor Richard Fadden, are important, credible commentators on China. But they represent one very specific, hard line conservative viewpoint that needs to be balanced by those who believe a more constructive engagement with China is both necessary and possible.

In addition, as an earlier blog has noted, even conservative commentators like Republican (and Canadian) David Frum can distinguish China’s implacable authoritarianism toward its own people from its less aggressive external posture and therefore champion cooperation over confrontation with China:

If we build a world of trust that’s efficient and attractive enough, we may find that we can inspire better behavior from China too. Great nations do not react well to threats, and they react even worse to insults and name-calling of the empty Trumpian kind. But they do sometimes respond to positive incentives … [such as] a partnership of trusted partners in global health….

A refreshing newcomer on the scene, “dedicated to promoting sustainable peace through diplomacy, dialogue, and constructive engagement” is the  Institute for Peace and Diplomacy (RI President Peggy Mason is a board member). They recently hosted a webinar on China entitled China’s Vision of International Order, the recording of which can be accessed here.  An earlier webinar, in May 2020, focused specifically on Canada–China relations and can be accessed here.

We call on the Government of Canada to champion the UN Secretary-General’s call for all nations to resist a new Cold War with China in favour of maximum efforts to promote pragmatic, constructive cooperation wherever possible.

Ceasefire.ca is a public outreach project of the Rideau Institute, bringing together Canadians who want Canada to be a leader in promoting peace, disarmament and the equal right of all peoples to peace, security and justice.
——————
Peggy Mason, President and lead weekly blog post writer
Bill Robinson, editor
Sarah Bowles, network communication